In September 1834, when their daughters were nine, five and one month, both parents Joseph and Christiana Badcock fell ill.
Joseph wrote a will on 7th September 1834, leaving everything to Christiana Badcock Williams. It appointed her, and her brother, William Braund as executors. It was witnessed by Ann Northall, who appears to have been a neighbour in Dartford. Joseph died on 17th September and the will was proved on 26th September.
Christiana wrote a longer will on the 13th October 1834, when she was already a widow – using William Braund, watchmaker, and Charles Northall (brother of Ann Northall above), as trustees, until her children reached twenty one. It was witnessed by two more of her brothers, John and Thomas Braund, and by Mary Cartwright (note that John Braund married Elizabeth Cartwright, so Mary Cartwright may have been a relative). Christiana died on 16th October 1834.

Shortly after that, still in October 1834, a young man who was an assistant in the shop also died, possibly also of typhoid.

What followed this tragedy is the story of a family pulling together, all over the country, to look after three little orphan girls.

George was a Silk Mercer in Dartford, Kent, like Joseph Williams, at least in 1851, which is the first time I can find him in the census, but described as a Linen Draper in 1861. By 1871, George Braund, he was a manufacturer of hosiery, employing 50 men, 120 women, 20 boys and 30 girls, and had moved to Barrow upon Soar, Leicestershire. He married Ann Roughton and had a son George Percival and daughter Agnes Mary. He continued to live there, at Strancliffe Hall, until his death on 9th June 1901, when he left £7706 to his widow Ann. More of his story is told in A Foray into Fashion.

In June 1841, aged 6, Christiana was staying with her uncle, Thomas Braund, in St Stephens, Cornwall, along with his mother (her grandmother), Mary Badcock. Thomas died in 1843, as did Mary, so Christiana would have had to move on.
In 1851, Christiana, aged 16, was staying with her uncle, William Braund – a watchmaker, employing 8 men, in Bexley near Dartford, along with his son James and daughters Elizabeth and Jean , and his nephew, William Peardon – also a watchmaker. William’s wife, Elizabeth Sim, had died in 1841.
By 1861 Christiana was staying with her sister Rosina, who was now married to William Braund Box, in Highgate.
She had moved on again by 1871, to stay with James Braund, her Cornish farming  uncle, now a widower, as his wife Hannah, died in 1868. Also living there are James’ daughter, Maria and son, John Bernard Lang.
Christiana clearly got on well with her cousin John, as they married in early 1879.
Unfortunately John died on 23rd October 1900, and it looks as if she continued running the farm until she died on 8th September 1907 at St Thomas, Launceston, Cornwall, leaving £986 12s 11d to William Williams Box, solicitor.

She may have been at a boarding school, aged 12, in the 1841 Census, she does not appear to be staying with any of the Braund family, but is in a household with two women and seven girls between 7 and 12 (and I think two servants).

After the death of her parents she was living with William Braund, the eldest of her uncles in June 1841, however when William’s wife died in October 1843 she must have had to find somewhere else to live.

It may seem a strange co-incidence that Rosina should marry someone with a middle name of Braund,  but the eldest of the Braund siblings, Elizabeth Braund (1793-1849) married John Box (1788-1849) on 9th June 1818, and they had a son, William Braund Box in 1815. Rosina and William Braund Box were my Great Great Grandparents, and one of their eight children was John Robert Box, my Great Grandfather.

John Braund, referred to above is John Burnard Lang Braund, son of James Braund. He and Christianna lived at Newton Farm, Boyton. (OSM) 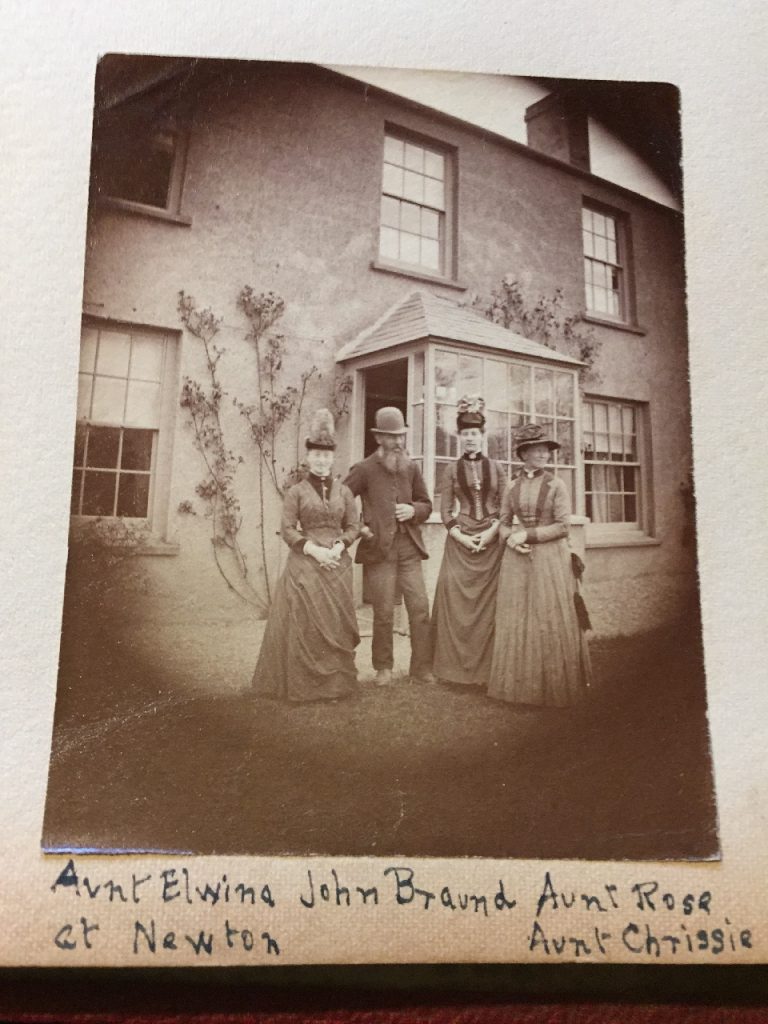 Aunt Elwina was (probably) born Elwina Joyce in about 1853, in Hinckley, Leicestershire, and married Arthur Williams Box about 1884. 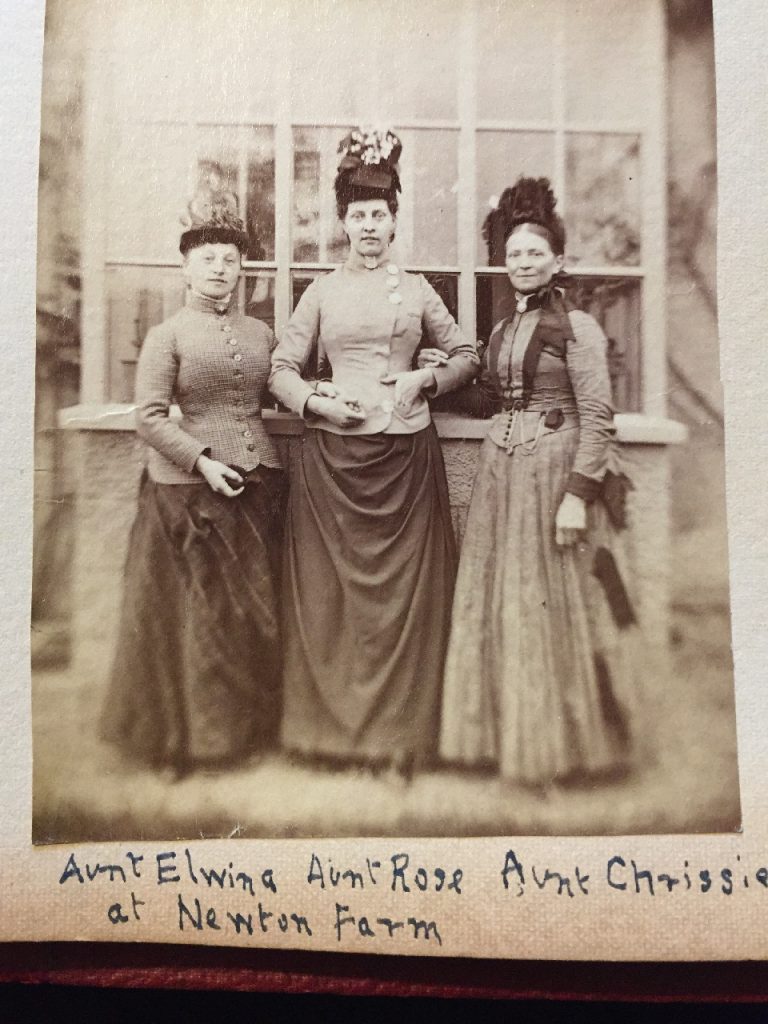 Great Aunt Rose was born in 1884, so this would have been about 1893. Arthur Williams Box (1853-1940), was  living in Launceston in 1891, with his wife Elwina, which would be convenient to  I do have a note which says that he bought the Foundry at Maramchurch from his cousins, Edward and Henry. His occupation, by 1911 is shown as Iron and Brass Founder, and his business as Kitchen Range Manufacturer.

Aunt Janet might have been Janet Webster (1863-1942). She married Thomas Austin in 1900, and by the 1901 Census they were living at Queniborough, a village near Syston in Leicestershire, Aunt George would be George Braund’s wife, Ann (nee Roughton)- presumably called Aunt George due the number of Anns in the family, and was living at Strancliffe Hall, in Barrow Upon Soar, about 13km on foot from Queniborough. George Braund died on 9th June 1901, so Great Aunt Rose may not have met him on that occasion.

What did Joseph and Christiana die of ?

Although the mid 19th Century offered a plentiful selection of deadly diseases, Cholera, Diphtheria, Tuberculosis etc; a plausible candidate is Typhoid. This is spread via drinking water, and if the water in the shop was contaminated, but the water at home was not then this would account for the children not being infected. The young man described as ‘assistant in the shop’ could well have been a apprentice, and as such may well have lived at the shop.

In 1834 nobody understood the mechanisms by which diseases spread. It would not be until 1859 that William Budd would publish ‘On intestinal fever’ about his observations about typhoid in The Lancet, influenced by John Snow‘s discoveries about how cholera spread and it would not be until Louis Pasteur‘s publications around 1864 that the germ theory of disease would start to become mainstream.

By 1896, when Rosina, the eldest and Christiana , the youngest of the sisters were 71 and 62 respectively, Almroth Wright had developed an effective anti-typhoid vaccine and typhoid was no longer the killer it had been.

With family scattered across the breadth of England, how did the family get to hear the news and keep in touch during and following the dramatic events of 1834.

There was an impressively good postal service in 1834, even though it was five years until the 1839 Postage Act, which would bring in the Uniform Penny Post and the Penny Black stamp. The letters carrying the news would have been carried by the General Post Office, and paid for by the recipient. The network of sorting offices and mail carriers was however already established.

By 1850 the General Post Office, boosted by the rapid growth in mail caused by introduction of flat rate postage had become the impressive operation described at ‘The London Post Office 1850‘, which is largely drawn from the description in the magazine Household Words, edited by Charles Dickens – at around page 6 of the March 30th 1850 edition.

Unfortunately I have not correspondence from this time, but I am sure that there would have been updates and discussion about what to do being carried across the country.

When Mary Ann Braund Box travelled to Edinburgh to marry Robert Bryson in 1843, she must have travelled by Stagecoach, and these events were a decade earlier.

By the time Rosina needed to leave William Braund’s home in Dartford, to Lawhitton in Cornwall, some time between 1841 (where she is shown in the Census) and 1845 (when the marries William Braund Box), she could have travelled much of the way on the Great Western Railway main line, which was constructed between 1838 and 1841. This huge boom in railway building must have transformed transport during this time.