Robert Bryson (1778 – 1852) was a Clock and Watch Maker of Edinburgh, as well as being Clock and Watchmaker to Queen Victoria and Co-Founder of what would become Heriot Watt University.
He had four sons and two daughters

His third son, Robert Bryson junior, married Mary Ann Braund Box (1817-1899) on 10th July 1843 – possibly at St Cuthberts, Edinburgh (although some records suggest the same date, but at her home town of Launceston,  Cornwall).
Mary Ann Braund Box was the daughter of John Box (1788-1849), who was also a Watch and Clock Maker. He was also my Great Great Great Grandfather. John Box’s son William Braund Box (1815-1891), Mary’s elder brother, was also a watch and clock maker.  There was clearly a close and ongoing connection between the Box and Bryson families.
Christina L. Box, eldest daughter of William Braund Box and his wife Rosina (nee Williams) was born in Holland , Edinburgh in 1848 – when her parents were probably visiting the Brysons (I am not sure where Holland in Edinburgh was). The birth was attended by Dr Simpson, after whom the Simpson Memorial Ward of the Royal Infirmary  (where I was born) was named.
My Great Grandfather, John Robert Box, lived  for three years with Robert Bryson junior, and John’s aunt Mary at their house in Edinburgh in the 1870s, and is recorded as a visitor there in the 1871 Census.

I suspect the 1843 marriage between Robert Bryson junior and Mary Box took place in Edinburgh, as they would have then set up home together. Whether it was the bride or groom who traveled, it would have been by stage coach, or possibly mail coach as the East Coast Main Line was not completed until 1846, and the Caledonian Line did not reach Edinburgh until 1848.
According to the Georgian Index web site the mail coach took about 60 hours to reach Edinburgh from London

The clock he made for the Observatory, referred to above can now be seen at the Old City Observatory on Calton Hill, in its Clocks collection.

There are pictures of one of the clocks he made at http://www.british-antiqueclocks.com/stock/robert-bryson-edinburgh/

Fellow of the Royal Society of Edinburgh

He was proposed as a Fellow of the Royal Society of Edinburgh by Thomas Brisbane, 6th Governor of New South Wales, and Astronomer (after whom Brisbane, in Australia was named).

According to the Edinburgh University History site on Leonard Horner

In 1821, Horner founded the School of Arts in Edinburgh, for the teaching of mechanics. He had been inspired by a conversation with Robert Bryson, a respected Edinburgh businessman, and owner of a watchmakers shop. The two men fell into conversation, and, prompted by a question from Horner, Bryson expressed some frustration that young men entering his trade hardly ever received any mathematical education, and that this had a negative effect on their daily lives.
Horner had an idea that a means might be devised of providing such education for the working classes. His outline of a proposed school was circulated to selected master mechanics, in order that they could gauge interest amongst their workmen. Only a month after the conversation in Bryson’s shop, a committee had formed with the purpose of bringing the plan into fruition. The first institution specifically designed to provide practical technical education for the working classes, the: School of Arts of Edinburgh for the Education of Mechanics in Such Branches of Physical Science as are of Practical Application in their several trades opened, in October 1821, in Niddry Street, Edinburgh. It was an immediate success. Probably the first institution founded specifically for the technical education of the artisan classes, the School of Arts heralded a new era in the history of education in Britain. As a result Lord Cockburn described Horner as ‘indirectly the founder of all such institutions’. Horner was also one of the founders of the Edinburgh Academy.

According to the Heriot Watt Universiy site

The lack of technical and scientific education available for workers was becoming a problem. One day, linen merchant and social reformer Leonard Horner discussed the problem with his friend clock maker Robert Bryson who was finding it difficult to obtain classes for his apprentices. They decided to solve the problem themselves, and with the support of wealthy Edinburgh citizens such as Sir Walter Scott, Lord Cockburn and the Craig family of Riccarton who agreed to give annual subscriptions to help pay for the cost of classes, set up evening classes with fees that working men could afford.
On 16th October 1821 the School of Arts of Edinburgh “for the instruction of mechanics in such branches of physical science as are of practical application in their several trades” held the first lecture in chemistry at St Cecilia’s concert hall in the Old Town. Despite criticism from the establishment fearing educating the lower classes would lead to revolution, the School also received support from The Scotsman, and within a month 452 students had enrolled. Within 30 years there were 700 Mechanics Institutes in Britain and the movement had also developed in American and Australia.

He is buried, along with several other members of the family at New Calton Burial Ground. The Find a Grave site has an entry for him. 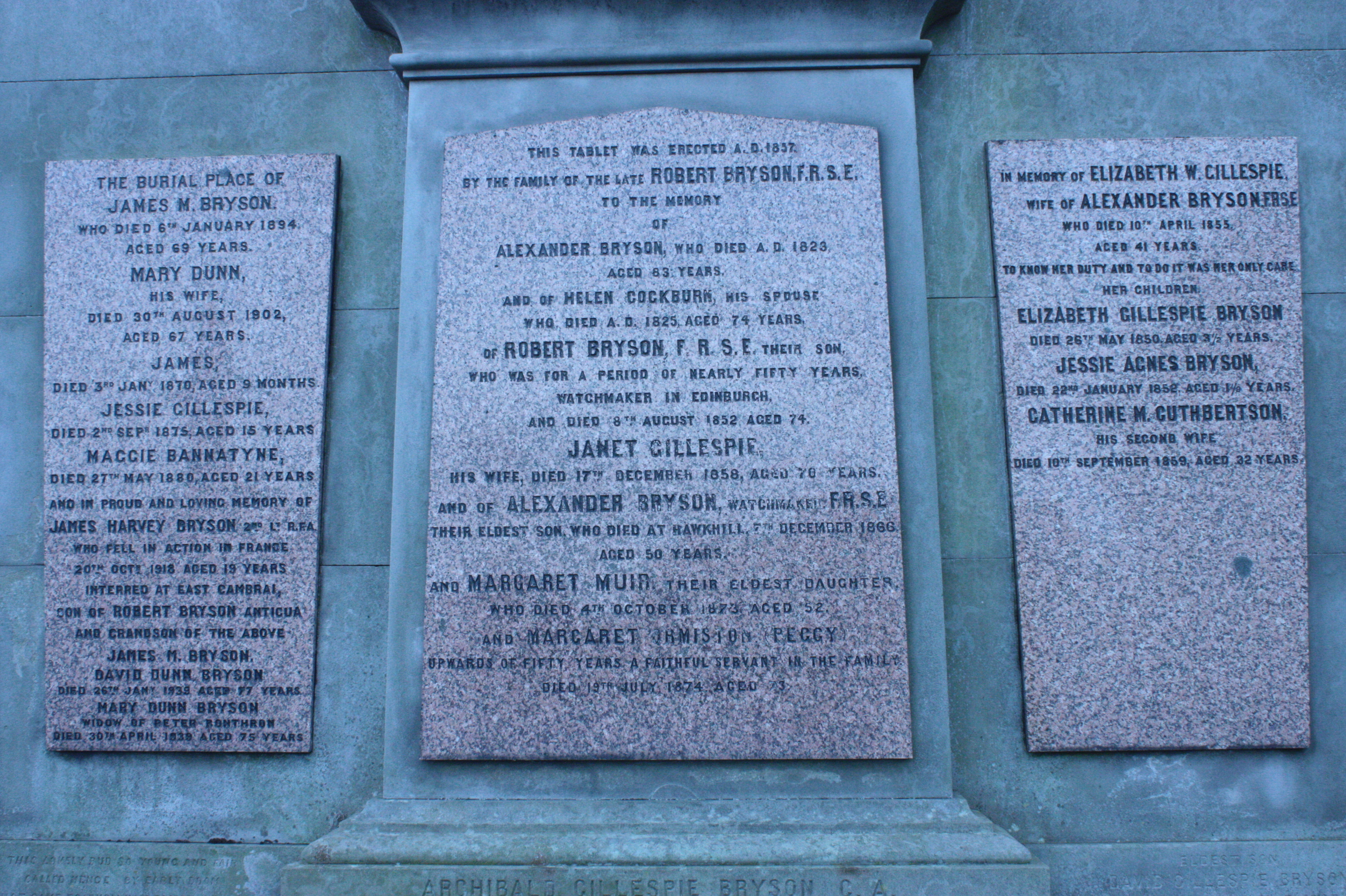 He lived at 17, Bruntsfield Place (OSM) from at least the 1861Census until his death on 20th March 1861.
Like his father, he was a clockmaker, employing 16 men and boys in 1861, and Clockmaker to Her Majesty (Queen Victoria) in 1871.
John Robert Box is listed as a visitor in the 1871 Census.
I inherited a silver fruit knife from him. 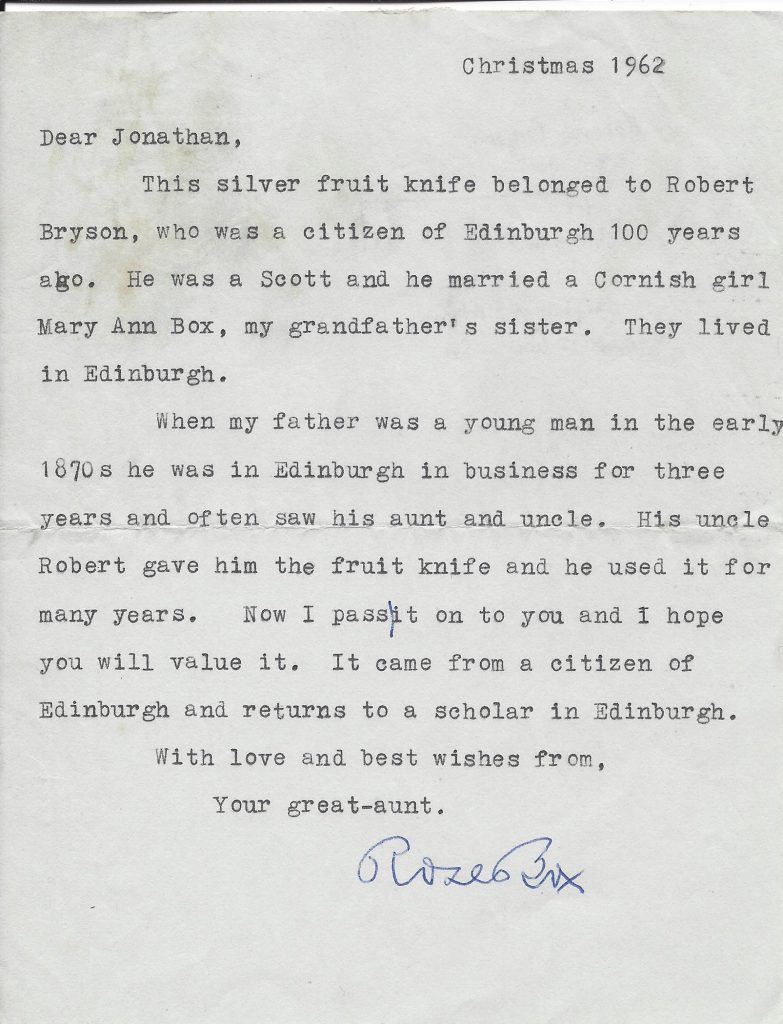 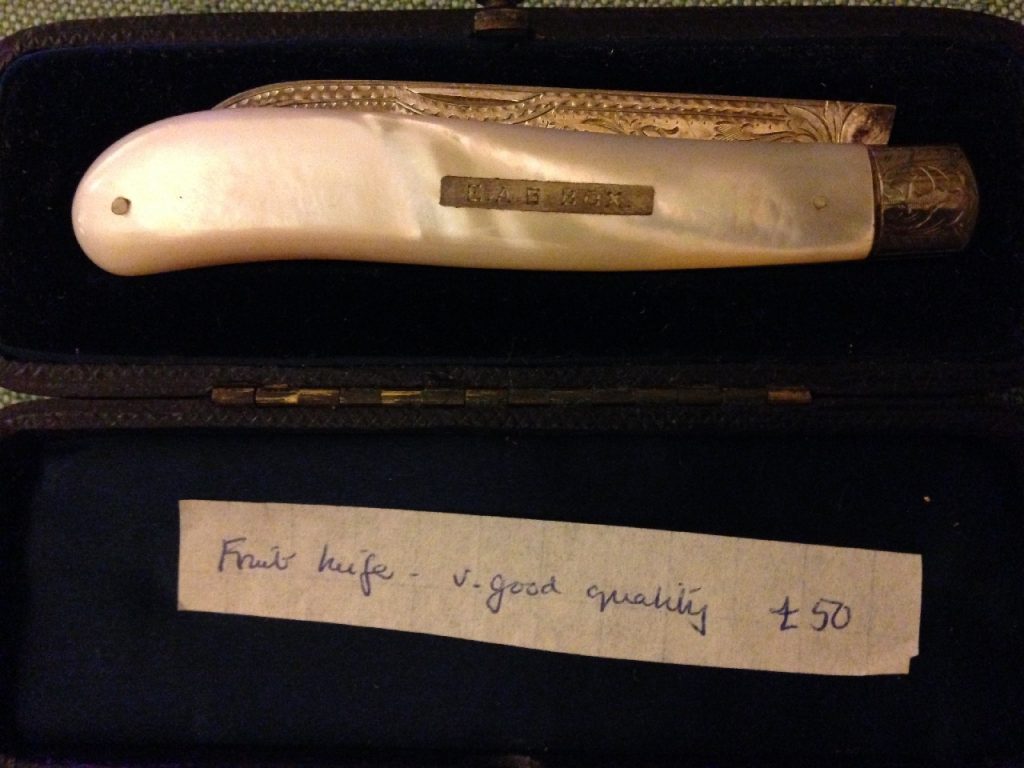 The late Mr. Robert Bryson – Edinburgh has lost a worthy citizen by the death of Mr. Robert Bryson, watch and clock maker, Princes Street. Mr. Bryson, who had been suffering for some time from a painful disease, had been practically laid aside from business for the last two months.His death, which was not unlooked for as the termination of his illness, took place on Saturday afternoon as his residence, 17 Bruntsfield Place. In public life, Mr. Bryson was chiefly associated with the Merchant Company, of which for the last twenty-eight years he was an active member and office-bearer.Four years after his admission he was elected an Assistant, and held that office from 1861 to 1864.In the latter year he was called to be Master of the Company, and filled that position with ability for three years.Of the George Watson, James Gillespie, and Daniel Stewart Trusts, which are managed by the Company, he was a Governor.Of the Merchant Maiden Hospital he was a Governor for twelve years.To its affairs he devoted much time, particularly to the management of the Peterhead estates.In this connection he took much interest in the improvement of the harbors, and in promoting the movement for a National Harbour of refuge at that port.For five years (1874-9) Mr. Bryson was one of the trustees, and for two years honorary collector, of the institutions in which he took a kindly concern was James Gillespie’s Hospital, of which for six years he acted as treasurer with the view of saving expense in the management at a time when the income was not so large as it is now.The welfare of the old people who resided in the Hospital was near to his heart, and he did much to promote their happiness and comfort.The feuing arrangements of the hospital property were also to him a subject of consideration, and he had not a little to so with the negotiations which led to the formation of the Colinton Road bridge. But, indeed, there was no department of the Company’s business which did not benefit by his advice and labours.One other scheme which may be specially mentioned as having his active support was the Provisional Order under which the splendid schools of the Company were organized.When he retired from the Mastership in 1877, a cordial and unanimous vote of thanks was awarded to him “for the great interest he has taken in the affairs of the Company, and for the efficient manner in which he had fulfilled the duties of the chair. ”Since 1876 he has been the Company’s representative at the Leith Dock Commission, and has taken a full share of the work of management of the port and harbour of Leith.At other public boards he was also useful and welcome member.He was one of the managers of the Infirmary, appointed by the contributors, chairman of the Royal Asylum, chairman of the Scottish Trade Protection Society, a director of the Watt Institution and a life member of the Heriot-Watt Trust, a governor of Trade Maiden Hospital, a manger of the Savings Bank, a J.P. for the city, one of the Council of the Dean Guild Court, and for some years auditor of the city accounts.By all with he was associated in these public offices he was held in regard, and his death will be mourned not only by his family, but by a wide circle of friends.

Bryson Road (OSM) in Edinburgh was named after him.

He is buried at Warriston Cemetery, along with Mary, in section A2 #538, with a monument by Thomas Stuart Burnett. Unfortunately his monument has been vandalised, as there was presumably some sculpture, which is now missing. 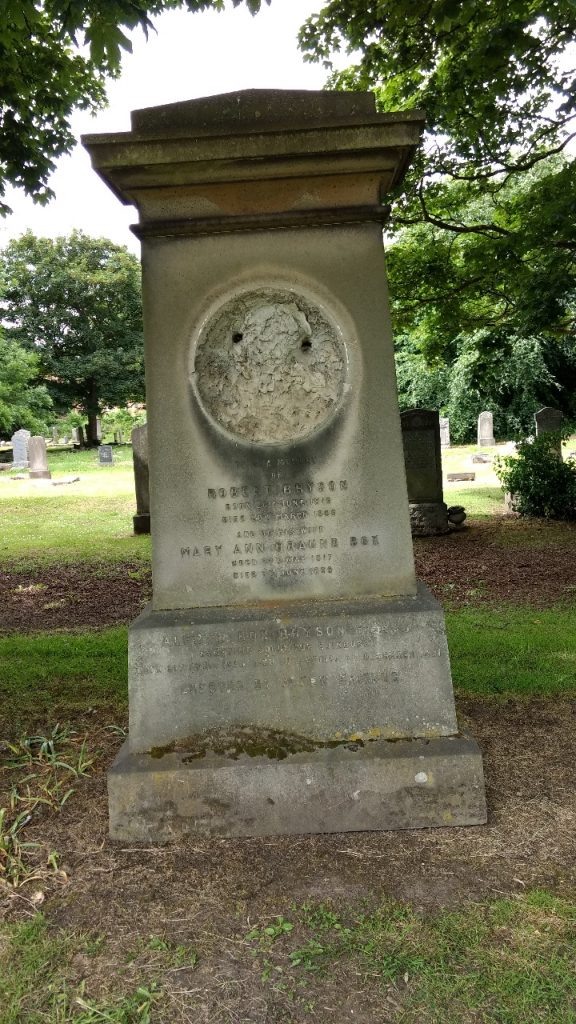 The inscription on the main part of the monument reads

AND OF HIS WIFE

Also in the base of the monument are other inscriptions related to other family members.

Above is a rough map of how to get to the monument, next time I go I will make a more detailed track.  Basically go in the entrance 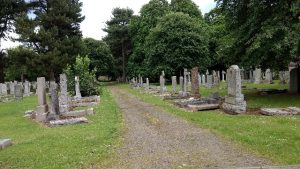 and turn off at a path looking like this to the left. 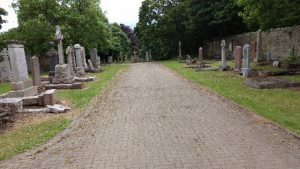 and the way ahead should look like this, but this is the main cemetery road which you turn off from.
Follow this wide path towards the north of the cemetery. Then turn right when you reach  another wide path, and then right again. You should be able to find the monument, to your right, less than ten monuments along.

Sale of Bryson and Son to Hamilton and Inches

In 1893 Hamilton and Inches acquired established clock makers Robert Bryson & Sons.  Hamilton and Inches, established 1866, started as a goldsmiths and jewellers, and by 1893 were at 87,88 Princess Street. They are still in business, and are now Silversmiths and Clock specialist by Appointment to Her Majesty the Queen, and based at 87, George Street.

The  fifth child of Alexander Bryson by his first wife, Elizabeth Waterstone Gillespie, was a William Alexander Byson, born 2nd March 1855. His mother died 10th April 1855, and by the 1861 Census, Alexander Bryson was a single parent, with daughter Margaret Gillespie, aged 8, William Alexander, aged 6 and Donald Cuthbert, aged 2. By the 1871 Census. William Alexander is, probably,  a scholar at Abbey Park, in St Andrews, aged 15. This was a boarding school run by the father of Donald MacKenzie Smeaton, who became MP for Stirlingshire. By the 1881 census, William Alexander is living with his uncle, Archibald Richie Gillespie in Leith, and his occupation is Marine Engineer.  He married Edith Agnes Smith (born 1866), and they had a daughter, Alice S.M. Bryson, born about 1890.  He was the creator of the public electric lighting system in Leith in 1897 (one of the first in the world).
Like Robert Bryson senior and Alexander Bryson he was a Fellow of the Royal Society of Edinburgh. One of his proposers was William Thomson (Lord Kelvin). He was elected to the Royal Society of Edinburgh on 2nd April 1888.  There was a probate record for a “William Alexander Bryson of 37, Park Road, Leith, who died 9th July 1906, confirmation of Edith Agnes Smith or Bryson widow, sealed, London.”, but 37, Park Road Leith is occupied by Paul Helm, Retired Supervisor Inland Revenue in the 1901 Census. (William Alexander Bryson, and Edith Agnes Bryson, and Alice were living at 9, Stanley Road, Kinseroft, Leith North, in the 1901 Census.
There is a vandalised monument (which I have not found) to him, (died June 11th 1906) in Warriston Cemetery.
There is a sketch of him by John Lavery in Glasgow Museum’s resource centre.