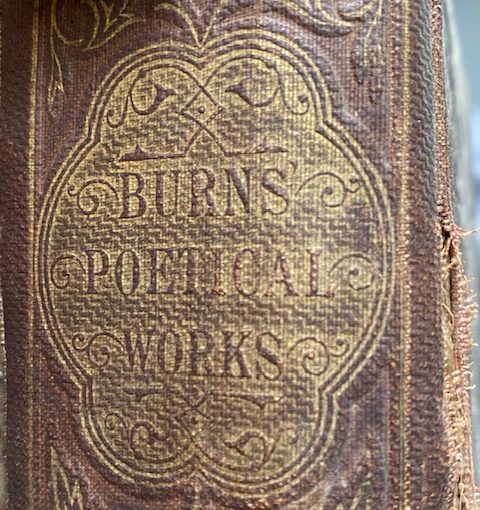 On or around the night of January 25th, many Scots celebrate the life of Robert Burns with a Burns supper, eating haggis and neeps, drinking whisky and listening to the works of Robert Burns. My Great Great Grandfather, John Robert Box, although not born in Scotland, may well have celebrated the night. He had a copy of ‘The Complete Poetical Works of Robert Burns’, dated 1875, when he would have been around 26.

He had also lived with his uncle, Robert Bryson, in Edinburgh for several years around 1871, so would have been exposed to the National Bard during that time.

Although born and growing up in Edinburgh, haggis did not feature prominently in our diet at home. My brother and I worked summer jobs in a cafe called County Fayre on Edinburgh’s Royal Mile. As it was, at the time, the first place, if you set off down the hill from the Castle, where you could sit down for a hot meal, it was very popular during the Festival, and many of the customers were American tourists. Haggis was one of the traditional Scottish dishes on the menu, so it fell to the person serving at the counter to explain Haggis to the customer, without putting them off. We did discover that Americans do not use the term ‘mince‘, which we had been using, and that ‘it is a bit like ground beef, but made from sheep’ worked better. The job was an eye opening experience, and gave me a lasting insight into what goes on behind the scenes when eating out, and an understanding of what it is like to be working in the industry.

When my mother brought me home from the Simpson Memorial Ward at Edinburgh’s Royal Infimary, the house she brought me to was 2, Lovedale Grove, Balerno. In those days Balerno was a village outside Edinburgh, although it is now a suburb.

Although quite small, the house had enough garden to keep my parents occupied, and I probably ‘helped’ with my toy wheelbarrow.

The elder of my sisters was born here, apparently a quick home delivery.

When my Grandparents left Grove Farm at Box, where they had been farming, they moved in to 141, Lordship Road, Stoke Newington with my Great Grandfather, Joseph Lines. This was around 1925, and may have been prompted by the death of my Great Grandmother, Jane Lines (nee Fitzhenry) on 7th June 1925. They lived with Joseph and helped run G&J Lines, until he died in 1931. They rented The Cottage, 55, Anne Boleyn’s Walk, Cheam, Surrey for about 3 years, while they had a house built on Warren Drive, Kingswood, so moved in probably about 1934.

The house was named Pickwick, after the village near Box.

The family were still living there when I was young, though I do not have clear memories of the house. My parents lived in Edinburgh and we used to spend Christmas with my Grandparents, traveling by various means. One of my early memories is of a taxi ride through central London, and the lights of Piccadilly Circus – there was nothing similar in Edinburgh.

I have some 2″ Slides from my Aunt Fanny’s collection, which show Pickwick, which I have photographed to reproduce here.

When my grandparents moved to Rest Harrow the croquet set moved with them, and we all played croquet as children.

I do not wear a tweed jacket and a tie for gardening, I feel I am letting the family down !

My parents got married on 2nd April 1956 at Shamley Green Parish Church. I have some 2″ slides from their wedding, which came from my Aunt Fanny – who may have taken some of them.

I probably need to re-take this one,