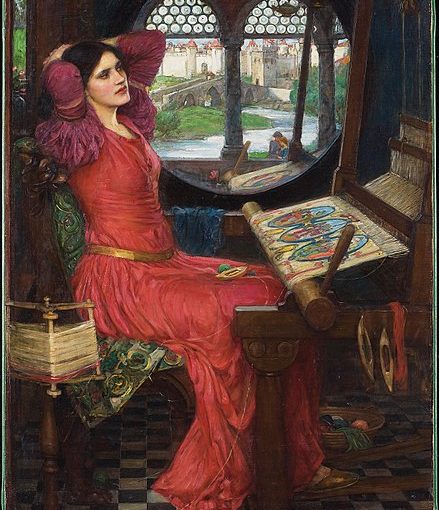 the Lady of Shalott

Very loosely, in Tennyson’s poem, the main character is isolated in a castle on an island, where she can observe the world through a magic mirror, and occupy herself by weaving a magic web, but may not leave the tower or she will be struck by a mysterious curse.

She knows not what the curse may be,
And so she weaveth steadily,
And little other care hath she,
The Lady of Shalott.

From The Lady of Shalott

Compared to many, I am in a very fortunate position in this lockdown. From my office window I see, just beyond a quiet (especially at the moment) lane there flows a small stream, flanked by willow trees. Beyond that are fields, and the dreaming towers of Oxford.

And through the field the road runs by
To many-towered Camelot;

Selected lines from The Lady of Shalott

I have plenty to keep my occupied, with the garden, software development, plenty of books, and the endless resources of the internet. The ability to have video chats with friends is an amazing development, which would not have been feasible a short while ago, and yet, seeing a young family walk past the titular phrase came into my mind, with many memories and connections.

Like many children I read the various stories of King Arthur and the Knights of the Round Table, and these acted as a springboard for many later interests.

The stories act as a framework to discuss good and evil, loyalty and treachery, and even the permanence of defeat and death, as Arthur sleeps in some secret location, to be awakened at the time of greatest need.

The following are a tiny fraction of the books which have been written about King Arthur. They show the diversity of the themes which can be woven from the basic stories.

The once and Future King

This begins with the light-hearted ‘The Sword in the Stone‘, which features Merlin turning they boy Arthur into various animals as part of his education. People being transformed in to animals is also a major theme in the story of Blodeuwedd in the Mabinogion which I mention below.

The Last Defender of Camelot

A short story by Roger Zelazny, this features Lancelot, who has remained alive until the present day, being summoned to awaken a sleeping Merlin, whose ideas on Kingship are incompatible with the modern world. Zelanzy’s novels are complex and many have relations to shadows. In The Chronicles of Amber the world we live in is a shadow of the ‘real’ world of Amber, and in ‘Jack of Shadows‘ the main character exerts his magic through shadow.

One of the earliest mentions of Arthur occurs in The Mabinigion, and reading that, in search of Arthur took me into a fascinating world of feuding princes, giants and magical transformations.

The story of Blodeuwedd, like that of The Lady of Shalott, is driven by a mysterious curse. Lleu Llaw Gyffes is under a curse that he may not have a human wife, so Math and Gwydion (the king, and his uncle – the relationships are quite complex), make a woman out of flowers to be his wife, and call her Blodeuwedd, which means flower faced.

Blodeuwedd has an affair with Gronw, and would like to be rid of LLeu, but he can not be killed during the day or night, nor indoors or outdoors, neither riding nor walking, not clothed and not naked, nor by any weapon lawfully made. Most adulterous spouses would give up at this point but the resourceful Blodeuwedd wheedles the secret out of her husband, in a conversation which I imagine went something like this:

Blodeuwedd: I am really worried about your safety, despite all that, so I can watch out, is there any way you can be killed ?

LLeu: I can only be killed at dusk, wrapped in a net, with one foot on a bath and one on a black goat, by a riverbank and by a spear forged for a year during the hours when everyone is at Mass.

Blodeuwedd: Let me make some notes…

A year later, another conversation

Blodeuwedd: I am still worried about your safety, and seem to have lost my notebook – silly me, it must be from being made of flowers – would it be easier if you showed me the standing on a riverbank, wrapped in a net and so on bit, maybe at dusk tonight.

LLeu (standing on the riverbank at dusk etc) : OK – like this

Gronw (having spent the last year forging a spear): Gotcha !

Lleu tells Gronw it is only fair that he (LLeu) should have a turn at throwing a spear, and Gronw ask if he can hide behind a rock, Lleu agrees and throws the spear though the rock anyway, killing Gronw.

One moral from this story is that someone can be incredibly powerful, but not necessarily as smart as they think they are (back in those days, naturally – I am sure there are no current parallels !) – or

Against stupidity, the gods themselves battle in vain

The historical Arthur may not even exist (as ‘1066 and All That‘ points out, it is important not to get him mixed by with King Alfred, who did exist), and as the sources of stories of Arthur are so diverse, it is not surprising to find sites all over the country associated with him. This does, however lead to a lot of interesting places to visit, from Arthur’s Seat, in Edinburgh – city of my birth, through Tintagel – legendary site of Arthur’s conception, to Glastonbury, sometimes associated with Avalon, where Arthur was taken after his last battle.

Seeking out these places gave me many interesting places to visit, and now provide memories.

When my father retired from the Forestry Commission, in Edinburgh my parents moved to High Ham, in Somerset, and you could see Glastonbury Tor from their garden. According to some clever marketing by the monks at Glastonbury the tomb of King Arthur is in the grounds of the Abbey.

I was listening to ‘The Myths and Legends of King Arthur and the Knights of the Round Table‘ by Rick Wakeman while writing this, although the legends have inspired other works, such as Parsifal.

The world of imagination

One of the reasons The Lady of Shalott sticks in my head is that it paints a picture, and in my mind’s eye I envisage the scene unfolding as the poem is narrated, similar to the way Narnia is created through Aslan’s singing in The Magician’s Nephew. A project I have had in my head for a long time – from long before it was technically feasible – was to turn my mental view of the poem into a video. I have started to look at Blender – I do not know if the movie will come to completion, but it does remind me of two things.

A benefit of enforced isolation has been an outpouring of creativity, as people find themselves with time on their hands an chance to try something new – the poem does not tell if the Lady of Shalott knew weaving prior to the curse. An old boss of mine was fond of saying ‘There are no problems, just opportunities’ – resulting a a certain amount of soto voce mutterings about insurmountable opportunities – but there is at least an element of truth in the saying.

The other is that the world of the imagination is even larger and more amazing than the real world. Examples include Randall Munroe’s xkcd comic ‘Click and Drag‘ (you need to click and drag to see what I mean)

(as an aside his comics on ‘The common cold‘,’Everyone’s an epidemiologist‘, ‘Sourdough Starter‘ , ‘Homemade Masks‘ and more are relevant to the Coronavirus crisis)

The quotation which had come to mind to sum up had been ‘To sail beyond the sunset’, which is again Tennyson, from his poem Ulysses, but although another favourite poem, it is not exactly upbeat. (‘To Sail Beyond the Sunset‘ is also the title of a science fiction novel by Robert A. Heinlein – in his most fantastic phase).

On the theme of journeys of the mind I turn to Hassan by James Elroy Flecker.

ISHAK
We are the Pilgrims, master; we shall go
Always a little further; it may be
Beyond that last blue mountain barred with snow
Across that angry or that glimmering sea,

White on a throne or guarded in a cave
There lies a prophet who can understand
Why men were born: but surely we are brave,
Who take the Golden Road to Samarkand.

HASSAN
Sweet to ride forth at evening from the wells
When shadows pass gigantic on the sand,
And softly through the silence beat the bells
Along the Golden Road to Samarkand.

ISHAK
We travel not for trafficking alone;
By hotter winds our fiery hearts are fanned:
For lust of knowing what should not be known,
We take the Golden Road to Samarkand.