On 27th September 1953, my uncle Tim wrote to my father to describe the time Tim and my aunt Jennifer spent with their brother, my uncle Jeremy in Poole (OSM).
My father would have been working as a Forester in Edinburgh at the time.

M insists that I write a page to make the envelope seem fatter. I don’t think you’ve heard about the adventure Jennifer and I had last W/E. I went down to Poole on Friday night, met Jeremy all right and spent most of the evening in the Poole Yacht Club, drinking and soaking in the nautical atmosphere. Saturday morning we took the DYC launch1 along to the club to fetch some ballast which they had used in an attempt to sink the Hornet in its safety tests. Great iron bars, ½ cwt I believe, tho’ they may have been 1 cwt. Anyway we took these back to the yard and even in the launch (a huge battleship of a thing) we got pretty wet – an accurate omen for the future! From there we went to the station to meet Jennifer, did some shopping and then had lunch. After some preliminaries we got the Hornet launched and we were away! After about 2 ½ minutes Jennifer lost her balance as the Hornet heeled over, which made her heel over even worse – then I lost my balance and the next thing we knew was that we were swimming around Poole Harbour while Jeremy, who knew what was happening, had simply done a sort of log-rolling act as Panic went over and was most unfairly still dry. While the boat was approximately in this position

Jeremy begins the salvage operations with: ‘I think the first thing to do is to get the sails down’ – this when they were several feet under water ! And he proceeded to do it. Then with a bit of clever balancing the whole boat turned right way up again and he commenced bailing with an action reminiscent of Sam2 digging. All this time Jennifer and I were holding the bow into the wind. When she was about half empty (Panic, I mean) Jeremy stuffed the spinnaker into the centre-plate housing to keep the water out – this is apparently normal practice and is the chief purpose of carrying a spinnaker. When he had completed bailing we got back in (actually Jen. and I bailed the last bit – the last bit of all is done with the rubber one to save the varnish) and we could assess the damage. This was fortunately negligible. Jennifer had rescued a plimsole as it was floating away on the billows and the only thing broken was the wooden pennant from the mast head. 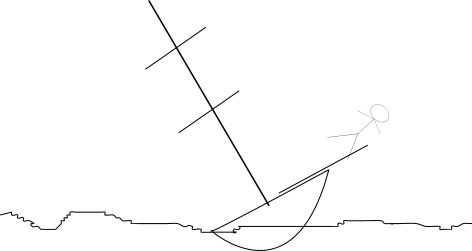 (another diagram) Actually there was a rope to hang on to, but I can’t draw ropes. Jeremy said that on the Round the Island Race a friend of his spent a good deal of the time two feet below the surface (when the boat yawed over) and they hardly saw him throughout the race because he was in a thick cloud of spray!
3

After hauling up Panic and getting some dry clothes on, we had a meal and went to see Genevieve in Poole. Quite funny, but really only one joke. Have you seen it ? (The film I mean). We also saw a thriller which was quite funny because we missed the beginning and were continuously greeted by such hilarious lines as :’So that’s how he knew the tea-pot !’ etc. etc.

Sunday morning there was a race in Poole Harbour. It was too rough for the Hornet (there was a very strong wind and it didn’t lessen all day), but Jeremy said people needed crews and so we all found ourselves in different boats. Jeremy was with a friend in a Snipe, Jennifer with a man in another Snipe and I was with 3 others (including another hopeless type) in an 18ft National. We had a very enjoyable sail, tho’ rather a wet one! Twice round a not very long course. Jeremy came in 2nd. I’m not really sure where Jennifer and I got in – nobody really seems to care where they come in, a rather nice aspect of sailing. All the yachting types then held a post mortem and then went off for lunch. We had sandwiches at the club and stayed some time on the starting balcony, where they have a marvellous pair of binoculars on a stand. There was a terrific wind flowing and nearly carrying us off.

Later we went to Sandbanks by bus and had a very nice time there, coming back in a large motor-boat at least 35ft long, I should think, but by the time we got to Poole we were very nearly wet through again. We returned home the same evening.

Here endeth the chronicle of Poole.

I have bought a developing tank – it’s a Paterson 35. Rather ingenious and nicely made. The spiral is made in 2 halves which can turn in relation to each other. They each have one or two teeth which engage with the perforations in the film – thus it works on a ratchet system and makes the film very easy to load, simply by oscillating the two halves of the spiral. I tried with a film in the shop and it works quite well. If also has one or two refinements which I needn’t mention. Haven’t got room for any more and anyway this must go in M’s so I’ll just wish you all the best for your car? and Cheerish from Tim.

Tim was clearly not put off sailing by his dip, as I remember he had a Sunfish, which he sailed on Lake Geneva. The Swiss regulations were strict and when the boat was inspected it had a have an anchor and similar items.

Jeremy has sent me a picture of Panic.

This picture was taken by Tim of Jeremy and Jennifer preparing Panic for launch.
Jennifer had probably come down on the train for the weekend, from her first teaching job at Ealing.
Tim was 21, and might have been staying at Pickwick with my Grandparents, having finished his degree at Cambridge.
My father’s older brother, Michael was probably in London, married to Fanny, and working at Philips

DYC is the Dorset Yacht Company, where Jeremy was serving his boat building apprenticeship. The company was founded in 1938, and still exists, through its history (and more history here) it has built sailing and motor yachts,  including, in the 1960’s the offshore race boat Spirit of Ecstasy, one of a number of boats designed by Arthur Hagg (who was also an aircraft designer). DYC also build HMS Wrentham, a Ham Class Inshore Minesweeper in 1955.  The company was also notable for a court case “Dorset Yacht Co Ltd v Home Office” in which on 21 September 1962, ten borstal trainees were working on Brownsea Island in the harbour under the control of three officers employed by the Home Office. Seven trainees escaped one night, at the time the officers had retired to bed leaving the trainees to their own devices. The seven trainees who escaped boarded a yacht and collided with another yacht, the property of the respondents, and damaged it. The owners of the yacht sued the Home Office in negligence for damages.

Jeremy had moved on by this time to work for Thornycroft. While at Thornycroft he was also doing evening classes to broaden his range of skills.

Round the Island Dinghy Race

This unique event took place on 6th June 1953. There is an account, from the point of view of someone (I think Ian Proctor) sailing an Osprey at  http://www.ospreysailing.org.uk/cms2/index.php/publications/background-information/19-round-the-island-race-for-dinghies-june-6-1953-cowes.
According to a post on the Classic and Vintage Racing Dinghy Association forum, it was Ian Proctor’s account, and according to a Yachts and Yachting forum post

The results a quite a who’s who’s of small boat sailing at the time..
Ian Proctor
Uffa Fox
Bruce Banks
Jack Knights
Beecher Moore
Just to name a few.

Earlier that summer I had sailed PANIC with two friends from Poole to Cowes for the Round the Island Dinghy Race organised by Tiny Mitchell. We had about 200 starters, some took 2 days and camped on the southern shore of the Isle of Wight. We had a fantastic sail up to Cowes with a good Northerly breeze so a relatively flat sea, we did Poole to Hurst Castle in 2 hours and about another two to Cowes, we also had on board the launching trolley and a suitcase! The race itself was in fairly light conditions, 60 miles so it took us about 12 hours. They have never had another similar as Health and Safety would go bananas! I remember nearly going to sleep on the sliding seat until the helmsman dipped my head in the sea!

F.G. (Tiny) Mitchell was Vice Commodore of Royal Corinthian Yacht Club from about the 1930’s

My interest in boats really started with holidays in Cornwall where I was fascinated by the boatbuilder Percy Mitchell at Portmellon near Mevagissey. We did go rowing on the Thames a few times and before I left school built an 18 foot canvas covered canoe which my friend Brian Culliford and I paddled down the Mole camping each night on the bank. When I started my boatbuilding apprenticeship in Poole I bought a 12 ft sailing dinghy in Christchurch and sailed it round to Poole. It seemed the natural thing to do as no one had cars or trailers in those days! It was called seamanship! After that of course my life was full of boats. I built PANIC in Poole, she was a Hornet with a Sliding Seat, the latest in those days.
Looking back on our trip up to Cowes, it seems madness today as with a good Northerly it would be France next stop if anything had gone wrong!

Jeremy and Brian’s trip down the Mole was probably in 1946, as Jeremy went to Poole in 1947. He remembers that they ran out of water, so had to drink water out of their handkerchiefs, and notnot surprisingly had upset tums for a while!
By an interesting co-incidence Brian (Bryan John) Culliford, like my father, went to school at Whitgift, and then went on to study Forestry at Bangor. Unlike my father, he then went on to work for the Metropolitan Police Forensic Science Laboratory. As described in his Obituary, he went on to discover a number of important techniques and worked with Universities and other police forces. He was awarded the Adelaide Medal for his contributions to Forensic Science.
As Jeremy says

He was a super chap as you have read.

Jeremy went on to design many yachts.

This gaff rigged ketch was designed by Jeremy in 1999, and has her own web site at http://www.bettyalan.com/. The “It’s about the boat” page has some of the hand drawn designs, and the site has a picture which brings back memories for me, of him up the mast.