In 1950 the physicist Enrico Fermi asked the question “Where is everybody ?“, by which he meant – given the size of the universe, the diversity of life on earth, occupying every ecological niche, and the fact that the Solar System is a fairly average star system; why do we not see signs of extra terrestrial life ?

The size of the universe

“Space is big. You just won’t believe how vastly, hugely, mind-bogglingly big it is. I mean, you may think it’s a long way down the road to the chemist’s, but that’s just peanuts to space.”
Douglas Adams, The Hitchhikers Guide to the Galaxy
Scientists have to resort to analogies to describe the size of the universe – the article linked above says that if the sun was the size of an orange then the next nearest star, Alpha Centauri, would be 2,300 kilometres away – about the same as the distance from London to Odessa in Ukraine. All the space in between is effectively empty. As stellar distances go, this is quite tiny ! Thus the huge number of stars in the universe –  about 30 billion trillion, is balanced by the huge spaces between them. Surely, with so many worlds, there has to be other life out there ?

In 1961 Frank Drake formalised the question of the number of intelligent life forms in the universe into the Drake Equation (spelt out in full in the Wikipedia article).
As a brief summary it multiplies the number of stars by the chances of a star having habitable planets, and then considers how many of those go on to develop life, and from those what chance that life will develop intelligence. Finally it considers the chances of us detecting that intelligent life. Since 1961 we have better data for some of the parts of the equation – for example we now have direct(ish) observation of planets in other solar systems.
I am not going to go into all the factors in detail, but I have had personal interest in some of them.

When I did Sixth Year Studies biology, you had to perform and write up an experiment, and I re-created – as best I could in a school biology lab, Millers experiment.  This was an experiment which showed that the more complex chemicals needed for life (amino acids) can arise spontaneously from the chemicals expected to be in the atmosphere of an early earth (or earth-. This involved explosive chemicals, sparks, Bunsen burners and other potentially exciting items, so in those days I was allowed a free hand to set this up, and it did produce some result – although in a school environment it is difficult to be sure this was not the result of contamination. Also not as dramatic as I had hoped !

If you use some reasonable assumptions into the Drake Equation (there are a number of calculators on the internet where you can try out different factors, such as one provided by the BBC) you find there could be quite a lot of civilisations in our galaxy, let alone the whole universe. The great distances alluded to earlier might explain why they have not dropped in on us, but might we be able to detect their presence in the sky ?
This process of using (mostly) our radio telescopes to listen for signs of intelligent life is known as SETI, and has been undertaken since at least the 1960’s, but so far has (mostly) not found anything.
This lack of demonstrable contact with other beings, in the context of the numbers of civilisations there could be out there is known as the Fermi Paradox. The Wikipedia article gives several possible explanations, one of which being that Civilizations broadcast detectable radio signals only for a brief period of time.

Listening to the radio

When I was at school we made what was essentially a crystal radio, by dropping a long piece of wire out of the physics laboratory window (which was on the second floor), and using a diode to demodulate the signal – that is to extract the sound signal from the Amplitude Modulated  (AM) radio waves, and an earpiece to listen to Radio One.  There was no amplification, and the tuning came mostly from the length of the aerial being around a quarter of the Radio One wavelength.
I also build a Sinclair matchbox radio, which was not a lot more complicated than that crude crystal radio. 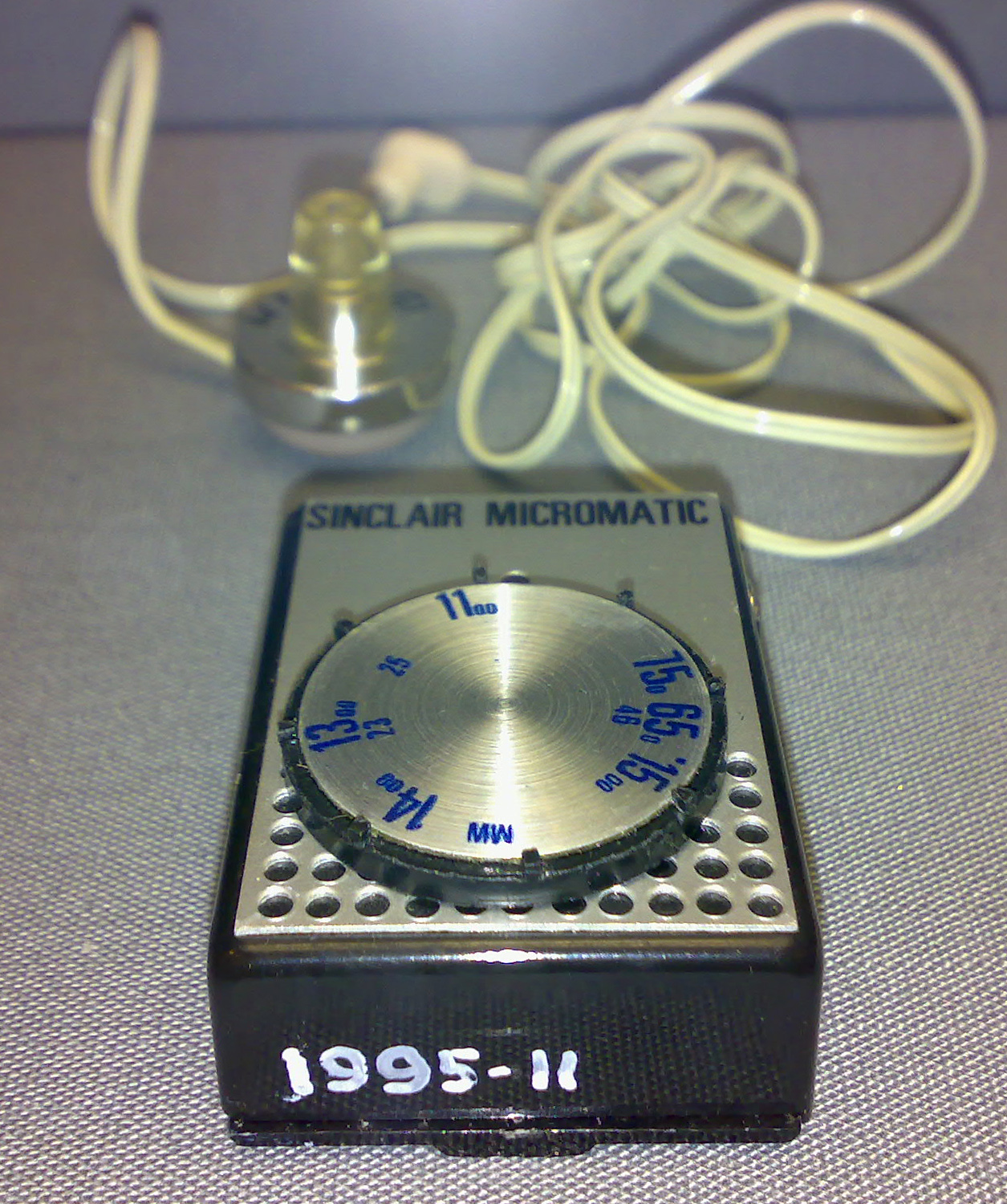 Frequency Modulated (FM) radio is more complex to decode, but can be built from general purpose components by an electronics enthusiast, and if we on earth detected FM signals from some alien source we would recognise them as containing information, even if we were unable to decode the language.
Even a television receiver, in the days before Digital Television, could be built by a hobbyist and the signal was quite recognisable .
With digital radio and digital television the signal is much more complex, and used Data Compression to carry many channels in the space which used to just carry one. The flip side of this is that all the regularities in the signal, which might give a clue to its contents, are eliminated. Unless you know where to start then decoding a digital TV signal is very hard.
In addition any signals, of any kind, which are sent out into space are – from the point of view of the broadcaster, a waste of energy.
Many of the signals are now travelling through wires, or optical fibres, rather than being broadcast, thus increasing proportions of TV are watched over the Internet rather than over the airwaves.
This drive towards communication efficiency is likely to mean that the radio (or electromagnetic) output from an advanced civilisation may not be detectable even with our sensitive instruments.

An alternative route to contacting other civilisations, would be to send a small robotic space ship. This would be take a long time to arrive, given the distances involved, and even at the speed of light, and there are many hazards which will deplete the number which can be expected to arrive.
This can be looked at from two directions – if we sent a number of space probes from earth, what are the chances of them returning information about an alien civilisation, and – if an alien civilisation had send a space probe to us and it arrived, what are the chances we would know it was there ?
A calculation, similar to the Drake Equation, may give us an idea of whether the answer to the lack of known probes from space is due to this being harder than it may appear.

In the early days of my career at Harwell I was working on Computer system Reliability. This gave me some insights into the many and varied ways that computers can go wrong. Colleagues were investigating the effects on silicon chips of being bombarded with nuclear particles, as would be required for space hardening, as we had access to nuclear reactors.
The on board computers for any form of interstellar probe will have to function for centuries, in an environment which is much harsher than on earth, where the atmosphere shields us from cosmic rays.

When we calculate the percentage of failure of our space probes due to equipment malfunction we will be using concept of Mean Time Between Failures (MTBF), i.e. how long, average are they expected to operate. For example a Cisco PIX firewall has an MTBF of over 11 years. While there is some pressure to develop and market devices with an MTBF of, say 20 years, this is mostly so that the expected failure rate within, say 5 years, will be very low. Manufacturers have no interest in developing equipment which will last significantly beyond the time that it becomes obsolete. We have little real experience of items in use for over 100 years, the Centennial Light being a rare exception, and even its story provides a useful lesson in how tricky reliability can be, as in 2013 it appeared to have burnt out, but it turned out that the Uninterruptible Power Supply which powered it had failed.

If the laser system used to push the probes was modulated to carry a signal, it would not reduce its efficiency greatly, but would be an additional signalling method, which would help with the Fermi Paradox issue that everyone could be listening, but nobody is sending.
(what to send – thought experiment  – show message to ant colony, dolphin, chimpanzee, octopus, primitive tribesman …)

Another possibility for reaching the stars is to go there ourselves (or for another civilisation from another star to come here). Much as I would like there to be Faster Than Light travel of some form, as is the staple of much science fiction, I take the lack of any evidence of alien visits to be a sign that this is impossible.
That leaves the slow route. There are many proposed solutions for this, but they are all huge projects, which will require the explorers and colonists to spend many lifetimes in space, in a Generation ship, before reaching their destination. Our rate of progress into space seems to have slowed – I was very disappointed when by the year 2001 there was not an almost routine, airline like, space flight.
Unlike the expectations of science fiction we do not have colonies on the moon, miners in the asteroid belt, and although there is talk of a manned expedition to Mars, I would say that a permanent population somewhere else in the solar system was a prerequisite to an attempt to reach another star.
Many of our ideas of the colonisation of space are influenced by the colonisation of America, however, as I described in Amazing Love, Demographics and Mass migrations, one of the reasons the people of Europe were willing to go to such risk and expense to undertake such a hazardous journey was that they were being pushed by population pressure at home. The parts of the world which have the capacity for a mass migration into the Solar system, let alone the stars, have already undergone a demographic transition, and a stable, mature populations lacks the incentive to emigrate to a less comfortable life.

Brian Cox, in his book Human Universe, suggests that the reason we do not see other civilisations due to the improbability of two of the steps on the route to complex lifeforms required for intelligent life in the Drake Equation. The two steps are the evolution of oxygenic photosynthesis, which created the oxygen levels we have in our atmosphere today, and the evolution of eukaryotes (cells with nuclei and other complex cell structures).
If this is the case then the universe may be awash with planets which are stuck at the single celled life stage, and seeding them with the right organisms could bootstrap their Cambrian Explosion, and possibly leading to civilisations  to converse with.

One thought on “Where is everybody – The Fermi Paradox, Self replicating spacecraft and computer system reliability”